All the action of live matches right on your PC!

Pro Wrestling Superstar is a unique simulation of professional wrestling where you're the promoter! 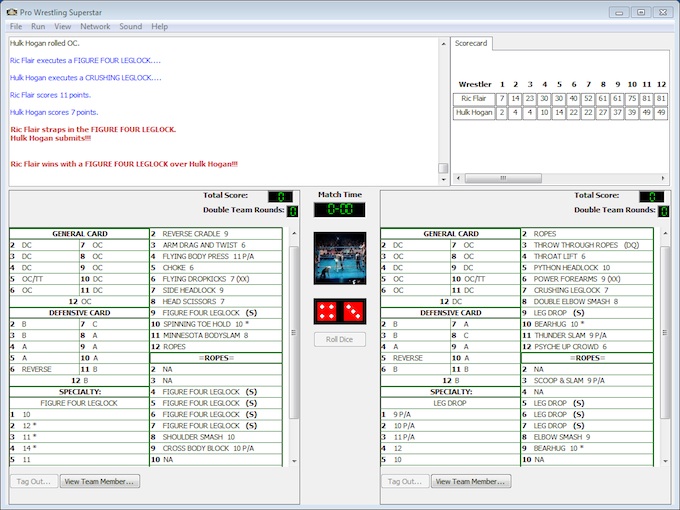 Create and customize wrestlers with the Wrester Builder. Export wrestlers to PDF or HTML files. Sixty wrestlers are included to help jumpstart a promotion. Direct access to an online wrestler repository with thousands of wrestlers available! You choose the wrestlers you want and PWS will download and install them for you!

Easily manage a promotion/federation. Create a roster and the championships for the promotion. PWS also tracks title histories for each promotion.

Create and customize managers/valets using the Manager Editor. Managers can provide that extra "assistance" that can completely change the momentum of a match!

Run singles and tag-team tournaments with any number of competitors using the Tournament Manager. Export tournament results to an HTML file.

Prefer to roll your matches on the tabletop? PWS has you covered. Create, Export and Print wrestlers in the wrestler editor. Manage your promotions in the Promotion Manager. Add and edit match results with the Results Database Editor.

With the Card Editor you can create and run your own wrestling shows. The results of each match are saved with the card. Cards can also be exported to HTML for posting on websites.

PWS has the best user support of any wrestling sim out there. The support for PWS is consistently praised for having rapid response time and going the extra mile to make sure issues are resolved efficiently and correctly.

Check out the latest release notes and see what features were added to PWS in the last release.
Get Pro Wrestling Superstar

Check out the testimonials from other players in the awesome Pro Wrestling Superstar community:

About 10 years ago, my mom was clearing stuff out of her house and sent me a box of stuff that included the Superstar Pro Wrestling game. Of course, I had to break it out and play a couple matches,. I tried to start up a fed again, but after a while, running cards by yourself with no one to share gets old. Then, when I was searching on the Internet one day, I stumbled across PWS and found not only a wonderfully efficient way to play the Superstar Pro Wrestling game, but also found others like me who share a true passion for the game. Having the computer run the match is a big time saver, but sometimes I like playing it manually because it takes me back to my cards and dice days. Although I am not active in the community as I once was due to other life commitments (work, family, dissertation, etc.), I still love this game and look forward to the opportunity when I can get back at it again.D.J. (Pro Wrestling Superstar player since 2004)

I have been playing the Superstar Pro Wrestling card game ever since it was released back in the 80's. Upon finding PWS for the computer, it has made completing the game that much easier. In the past, I never would have thought of doing a 700+ tournament but with the electronic version of PWS, I was able to complete this in little over an hour. It also allows me to create my own characters and make my interpretation of the game that much more interesting. I highly recommend using this game if you're looking to jump into this head first into YOUR version of the world of professional wrestling.D.B. (Pro Wrestling Superstar player since 2008)

The computer program that just keeps growing to support our constant needs. As I made cards for the game it became almost too much to handle, but when I found the perfect computer version it became fun again. Awesome must have part of your wrestling universe!B.B. (Pro Wrestling Superstar player since 2009)

I have had more fun with Pro-Wrestling Superstar than any pro-wrestling game before or since. It is so easy to pick up and play, yet so deep in features it will keep you coming back for more. There are so many wrestler action cards and gimmick matches to choose from, you will find yourself spending most of your leisure time promoting the cards of your wildest dreams. Don’t like the action cards you see - just create your own! With PWS, it’s so quick and simple that you can accurately create any star of yesterday, today, or tomorrow in no-time! PWS has everything a pro-wrestling fan of any era can look for in pro-wrestling game!J.B. (Pro Wrestling Superstar player since 2004)

There are two ways to get Pro Wrestling Superstar:

Buy it at the Pro Wrestling Superstar Store

An unsupported version of PWS is available. It has fewer features than the paid version, but it's a great way to get a feel for how PWS plays. This unsupported version has a wrestler editor, match result tracking, and a tournament mode. It does not have managers, the Promotion Manager, or the Battle Royal mode.